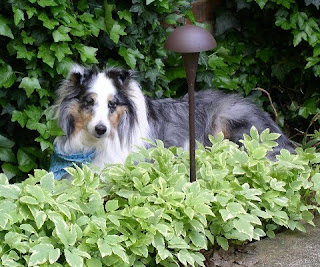 Jordan was born from champion lineage in Portland Oregon on Sept. 1, 1998. He passed away in the early morning hours of Monday, November 15, 2010 in his favorite sleeping spot on the floor of his human’s bedroom in North Georgia. At the time of his death he was being comforted by his special cat-friend, Twinkle and his human mommy, Becky Taylor.

Jordan was a very pretty boy, oh yes he was! His striking good looks and sweet personality made him the center of attention everywhere he went. Although Jordan knew he was handsome, he never let it go to his head. He remained an ever humble companion to his people throughout his years on earth.

Also, a very good boy indeed, Jordan aimed to please (almost all the time.) In the year 2000 he graduated at the top of his obedience training class. The teacher stated that, for his age, he was the most mature dog she’d ever seen.

Jordan’s hobbies included; eating, sleeping, waking his people at 3:00 a.m. simply to go outside and stare at the moon, lying on the front porch watching the snow fall, riding in cars, barking at nothing in particular, and napping in front of the fireplace. (Oh, and did I mention he loved to eat?)

He was an organizer at heart and always made sure the bathroom throw rugs were properly piled in individual heaps before he went to bed. Jordan liked things just “so-so” and took it upon himself to keep them just as he thought they should be.

Jordan had a very soft heart. He rarely ever chased cats, and even then, only chased those he didn’t personally know. He wouldn’t have hurt the proverbial flea.

Only once did he ever chew anything he wasn’t supposed to chew and never ever did he "go potty" inside the house, even up to his last day alive. (Well, maybe only a couple times)

Jordan did everything within his power to make his humans happy and proud.

He absolutely loathed lawn mowers and chased them every chance he was given. He took thunder and lightning as a personal challenge and tried to fend it off by repeatedly jumping at the sky, barking during storms. In true champion form, Jordan always emerged the winner,never giving up until the lawn mowers stopped and the storms moved on.

He also leaves behind his human family, Walter and Becky Taylor, and "the boy" Adam David.

He was predeceased by his step-sister, Yeller Taylor, and dear friend (and partner in crime)Spidey-Marie Whitehead.

Jordan will be sadly missed by his humans but they find great comfort in knowing he is no longer in pain. He is undoubtedly having a wonderful time in doggy heaven, chasing bears and deer with Yeller and over turning trash cans with Spidey-Marie.

The family will have a private ceremony honoring the life of their beloved pet. No calling hours will be observed. Memorial contributions can be made to the "Send Jordan's mommy to a beach in Mexico" fund. :^)

Seriously now ...
Jordan,you quickly made a place for yourself in the heart of this "cat person" That place can never be filled by another. You were very much loved and will never be forgotten! I hope that in the end, you felt that love more than ever before. Sweet dreams pretty boy! May you enjoy eternal peace and happiness.

Becky Taylor
Born and raised amidst the beautiful rolling foothills of the Appalachian Mountains in Southern Ohio, Becky relocated to the North Georgia area in 2004. She is a Life Coach/aspiring actress/Medical Lab Technician as well as the mother of three, grandmother of six, and wife to Walt, one of the most remarkable men on earth. Becky enjoys traveling, writing, decorating and spending time with her family (especially her perfectly adorable grand-children)